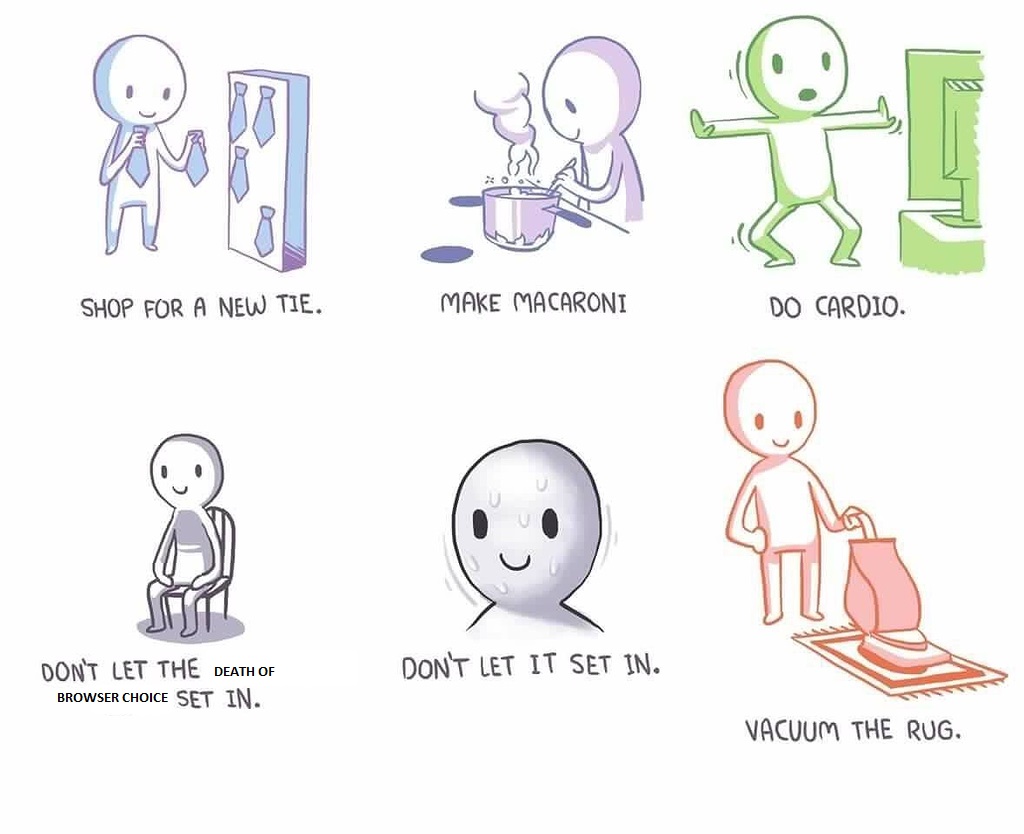 Original comic credit to @shenanigansen, modified by me.

Back in the 90’s the dominant web browser was Microsoft’s Internet Explorer. While there was initially competition from NCSA’s Mosaic and Netscape Navigator, Microsoft’s decided to abuse its dominion over personal computing (via the Windows operating system) and they cornered the web browser market almost entirely by bundling their browser with every install.

This anticompetitive behaviour led to lawsuits from competitors including AOL, who claimed that Microsoft violated antitrust laws by bundling its web browser software to push Netscape (AOL’s popular browser before Microsoft got involved) out of the browser market share.

People familiar with browsing the web at the time may remember another prominent feature of the era: websites not working correctly unless you had a particular browser installed.

Many sites would require you to use a particular browser because despite standards created by the W3C, Microsoft could use its dominance to push whatever technologies it wanted in the browser as part of the Embrace, Extend, Extinguish strategy strategy. This would force other browser manufacturers to either pivot and try and recreate these standards-violating features in a game of catch-up or continue working on their existing product and cause their users to have a sub-par experience when they couldn’t access or interact with swathes of the web. A common refrain from contrarians disconnected from reality was that website developers should just use the widely accepted stuff; but this meant dropping important features and capabilities that users were beginning to rely on. Everyone would deride government departments for their aging sites or use an opposing companies website who could offer all the new features and technology.

The Great Browser War has a happier ending though. Thanks to Microsoft’s absolutely appalling track record of building, maintaining, or growing their products, Internet Explorer languished after the turn of the millennium. With an up to 95% market share they stopped revolutionising what could be done and eventually competitors stepped up, with Mozilla Firefox dealing the most noticeable first blow. Firefox helped popularise things we take for granted now like tabbed browsing and user extensions. Later, Google Chrome would also step into the spotlight, with huge improvements in browsing speed and security. From 2008 and onwards was a better time for consumers and developers, with a decent collection of browsers from different providers that helped ensure people stuck to standards. Sure, some browsers released concepts early - but if only 30% of your users could access that feature you wouldn’t want to make it the linchpin of your site.

Microsoft absolutely cocked up every subsequent browser release. Aside from being late to the party on many popular features, every release had compatibility issues with standards. To make matters worse they introduced “Compatibility View” that let you view pages designed for older IE version in modern IE, except no Compatibility View actually worked like the version it tried to emulate. This meant if you wanted to support up to 5 major IE versions you could be supporting 15 different sets of rendering quirks. Thanks to years of problems, even a full rebrand and new system with “Microsoft Edge” couldn’t recover their browser share. In 2018 Microsoft announced they would be moving the underlying rendering engine to Chromium, Google’s open source version of its browser, due in part to continued issues with Edge and website compatibility.

Apple kept developing Safari, and with the iPhone growing in popularity it pushed everyone into the iOS version of Safari. Of note was Apple’s complete refusal to allow competing rendering engines on Safari. Even once they allowed alternate browsers, each one is just a layer of features over iOS WebKit. Despite any PR about security, this is a targeted move from Apple, stolen directly from Microsoft plays in the 90’s browser wars. Until 2014 it was even more insidious, because Apple refused to let 3rd party browsers use the iOS Safari JS engine, purposefully hampering their performance.

Firefox mostly kept doing its thing under Mozilla. They produced the MDN web docs (Mozilla Development Network) which is probably one of the best resources for learning HTML, JS, and CSS. Firefox also started testing out new technologies like Rust, working on adding memory safe compiled language to Firefox’s Gecko rendering engine to reduce security issues and move to faster rendering. However the lack of capital for advertising and sponsorships compared to FAMAG companies (Facebook, Apple, Microsoft, Amazon, Google) meant a sliding browser share. Some of their money-making moves (ads on new tab page, suggestion search ads) have drawn the ire of their users who preferred the privacy conscious roots. They’ve at times also had to make money through partnerships with other search giants like Yahoo and Google to keep money coming in. And without the capital of companies like Apple and Google, they were never able to succeed in the mobile OS sphere which has only worsened their share in the overall device browser usage statistics.

Meanwhile Google pushed Chrome. The Chrome market share continued to grow, thanks in part to some amazing speed enhancements in Chrome and its much-touted sandbox security model. Also because Google was ubiquitous and supremely cashed up and could spend a lot of money advertising Chrome and pushing it everywhere. It also rolled out the Android Browser/Chrome as the default browser in its Android operating system which quickly grew to be the dominant player thanks to targeting more diverse and larger markets than Apple’s luxury focus.

There have been a bunch of other browsers over the years including Opera (which switched to Chromium in 2013), Vivaldi (also Chromium), and Brave (also Chromium)

Apple recognises its limited position. Its desktop share is relatively tiny although it has a strong mobile hold with iOS. However thanks to its mobile platform it can push web users to apps. Apple loves people using apps on iPhones because it pushes people further inside its walled garden where it controls a lot more features and access for both users and developers. Apple pushed a number of changes in Safari (desktop and mobile) to help limit tracking cooking cookies ([1], [2]) as a direct shot across the bow of Google, whose dominance as a company comes from their advertising business which is enabled by web tracking. It also pushes Reader View which gets rid of ads and excess content to let people focus on reading an article or website.

Firefox has pushed privacy focuses too, including blocking all third party tracking cookies as of 2019. Firefox also supplies a Reader View.

Google however controls the lion’s share of the browser market, closing 2021 at 63% of all web browsing (desktop and mobile). Because of this, they can start pulling a Microsoft. 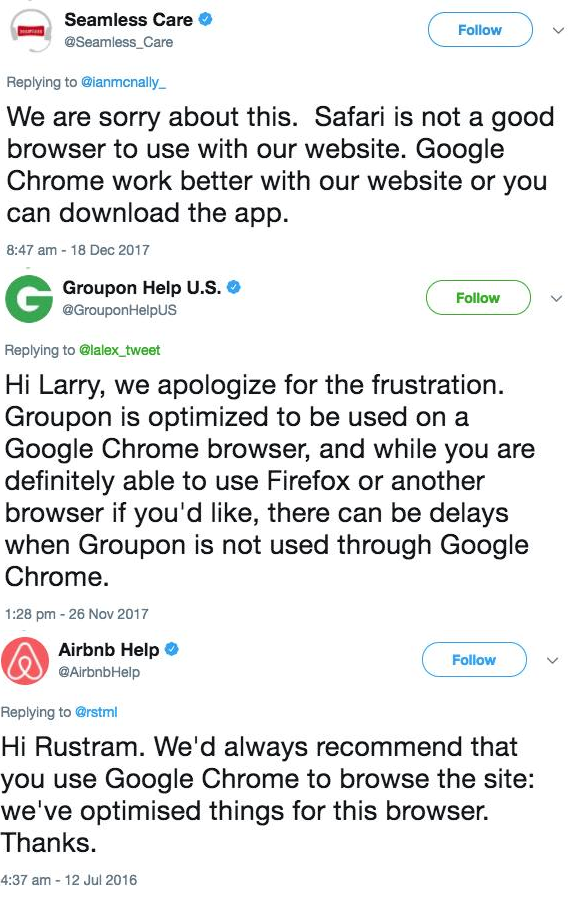 Since they have such a lead, and also legions of developers at other companies using Chromium to help fix bugs, they can push new features. They can also push things that aren’t ratified as standards by W3C that they have introduced, blocking users of other browsers from applications like Google Meet or Google Earth. They can also modify their ecosystem to push out developers of ad-blocking extensions that compete with their business model as well as push new non-standard systems of invasive tracking like FLoC and Topics to retain their advertising dominance even at the expense of user privacy. By pushing their new features on to website developers as a way to let your users do new cool stuff with browsers, they are trying to push out other browsers, much like Microsoft did 20 years ago. Even more recently, we’ve seen Google try and undo web standards, removing features that have been relied upon for years.

We’ve got three browsers; one of them is scrabbling for spare change in between the couch cushions, one of them is telling you to use apps instead, and the overall giant is now using its market share to bully the world into doing what it says. Because of the profit motive and the lack of care by governments to step in against antitrust or anticompetitive behaviour I think it’s going to be an issue for some time.

But you, as a user, can still do some things. You can support and use independent browsers like Firefox, have your voice heard in developer forums, spread the word about the issues and history of the browser wars. If you’re a website or web app developer; don’t use features that are only supported in one browser.

Support standards, support independent options, and always be wary of companies who wield the term “open source” to distract from their desire to control everything.

Thanks to @shmouflon and Ash for proofreading and @yourcompanionAI for bringing up Google’s changes to internal APIs (limiting ad-blockers) and their FLoC/Topics attempts.