I’ve got an old HP N40L Proliant MicroServer that I’ve written about before and mentioned a couple of times in the past ([1], [2]). It’s been sitting variously in a storage locker and under my desk for the better part of six years and four house moves but I decided it’s finally time to either throw it out or repurpose it.

I’ve finally found a use for it that I can hopefully discuss in a future post, but here I’m dedicating some time to an issue I ran into when getting it all set up and going over some of the issues with troubleshooting when all signs point you in the wrong direction.

On the N40L, all four drives slot into SATA data+power connectors. From those four connectors, all four data cables combine into a single Mini-SAS SFF-8087 connector that goes straight into the motherboard with a locking connector. We can rule this out as an issue since we’d expect all four drives to fail.

For power, every drive has a 4-pin Molex connector coming off it that connects to the PSU. However, every pair of Molex cables from the drives (0 and 1, 2 and 3) goes to a separate cable leading into the PSU. So drives 0 and 1 connect to two Molex plugs on the same length of cable going to the PSU, and drives 2 and 3 connect to two Molex plugs on another length of cable that goes into the PSU. To me, this indicated that one of the Molex cables coming from the PSU was busted. 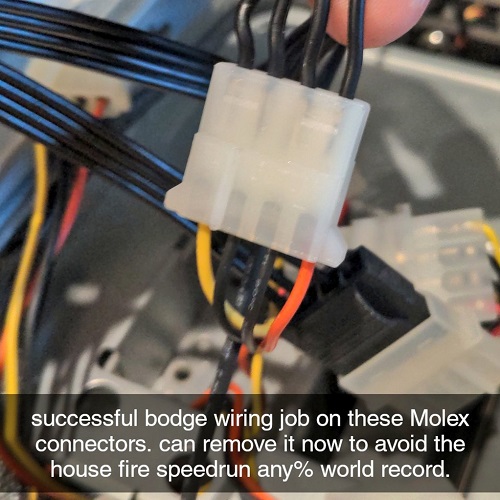 I connected two of the Molex connectors from this wiring job to the new hard drives, reassembled the whole server, and booted into the BIOS menu. Lo and behold, all four drives were now visible!

The story doesn’t end here though.

Swapping out some of the hard drives for SSDs, my hand slips and I knock one of the connectors real hard and jolt all the cables while the server is off but still powered. Booting into the BIOS menu, drives 0 and 1 are missing again. :(

I’m worried I’ve fucked the spare Molex PSU setup, and to get all four drives working the only option with what I have on hand is to take the Molex cable from the PSU that connects to the 2 and 3 drives and use my bodge wiring job again to power all four drives off the same PSU cable. I complete the setup, I boot into BIOS, and only drives 2 and 3 are showing.

All four hard drives are running off the same power cable from the PSU.

Three of the hard drives, including one that is working and the two that are not working, are all running off the same jerry-rig wiring job.

It can’t be the power supply, and I may have been wrong all this time.

At the end of my tether, I calmly take out my shitty wiring hack and get everything connected to it’s original setup. In doing so, I notice the SFF-8087 Mini-SAS connector, which clicks in to show that it’s connected properly, can wiggle a bit. I seat it firmly.

It turns out, it must have slightly come loose during all the house moves and somehow only disconnected the data lines for two of the four SATA ports, even though they are all housed in one connector.

When reseated the first time it worked. When knocked again, the same problem reoccured.

Sometimes, despite all signs and symptoms, the simplest answer may not the correct one.