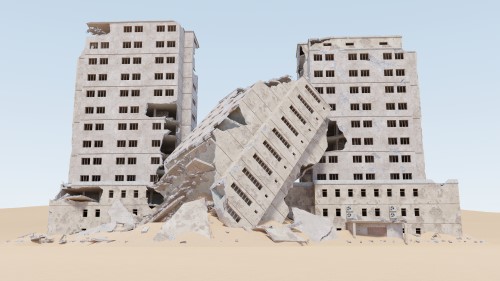 “Corporal, when you said we had a five star hotel to stay in…”

“Private I specifically said it was a five star hotel, past tense.”

After what felt like a relatively no good success on other renders I had worked on, I decided to try something a bit easier as a concept. Using my basic Blender workflow I started with a relatively flat (max 100m height) desert scene in World Creator Standard, then added one building group from the KitBash3D Aftermath set.

I wanted to create as more cohesive palette to the image, something that gave the impression of an intense desert, so I grabbed a desert texture from Quixel and applied it to the desert. I then used a MixRGB node in the material settings for all the buildings in the KitBash3D piece and blended between the default texture and the Quixel desert sand texture at a factor of 0.5. This gave the buildings a sand-worn appearance. I also did the same with the “damaged” sections of the buildings, but used a MixRGB factor of 0.1 so more concrete would show through, giving the appearance that the damage was more recent.

I then replaced all the rubble pile textures (around the bottom of the base) with the same desert sand from Quixel to make it look like sand had been blowing and building up around the base.

For the environment I used a simple Sky Texture with default settings, but the Strength turned up to 15, which helped match the lone light source (a sun) set to strength 10 and angled towards the buildings to throw them in sharp brightness but also highlight the shadows within the crumbling floors.

Although not as noticeable in this particular render I used a tiled texture rotational material node to break up the appearance of tiling. You can find it linked in an excellent video by Blender Guru. Both the video and the material node are free resources.